Would be nice to have notifications about most recent jailbreak apps and tweak updates from Cydia the way built-in iOS 5 notifications do, heh? Well, now we can have them! About three months ago Ryan Petrich promised to build such a tweak. This is Curiosa jailbreak app. 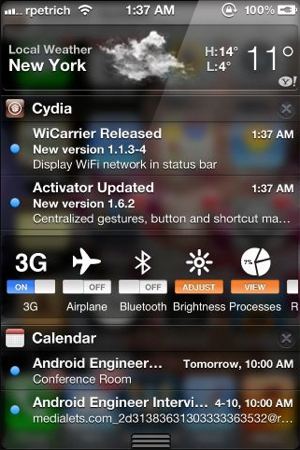 In last few years Cydia store developed rapidly and now is almost equal to App Store. Cydia allows to download and update apps in centralized manner without manually copying, unpacking and installing files - everything is done automatically. Meanwhile, software updates in Cydia, as well as in App Store, appear very often but to get informed about what's going on you have to enter the app itself and go to Updates tab. Jailbreak makes our life easier and this time it brings us some sweet software update features. The new Notification Center tweak written by famous iPad and iPhone jailbreak developer Ryan Petrich, allows to receive notifications about updates for addons and apps exactly when they are released. The name of this jailbreak app is Curiosa. 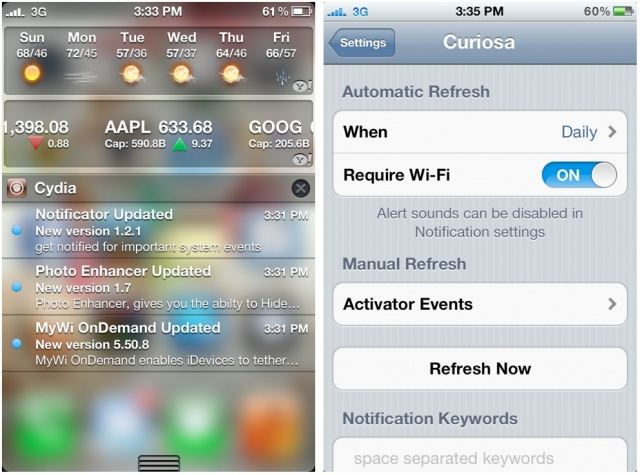 This way of getting notifications through Curiosa is really cozy. Messages about soft updates appear as standard banners in the top part of the screen and can be found among notifications about calls and text messages in Notification Center under Cydia icon. That icon notifies the user when certain update for app, addon, theme or tweak becomes available. You can jump to Cydia for downloading certain stuff by tapping that string or banner. There are few settings available for tuning Curiosa jailbreak app. For instance, you can set time for updates check: hourly, every two hours, every six hours, daily, manually of after respring. You can also choose between Automatic Refresh and Manual Refresh or choose the notification keywords. The Curiosa tweak is right now on the final stage of development and available for free download from Ryan Petrich Cydia repo: http://rpetri.ch/repo/
Blog