The best way to jailbreak iOS 6 betas is to download Redsn0w 0.9.13dev2 and use it for jailbreak. You need download this version because it gives you the possibility to fix SSH issues and crashes of some apps. This updated version was created by iPhone Dev Team specially for this. After new iOS beta release hackers launched Redsn0w 0.9.13dev1 specially to jailbreak iOS 6 beta 1. But many users complained on issues with SSH and apps crashes. It didn't work properly. That's why iPhone Dev Team released Redsn0w 0.9.13dev2 and you can download it here using direct links for Mac and Windows. 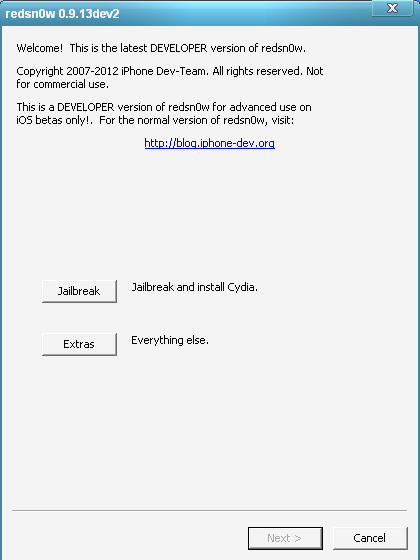 However I have to say you that it is a developer-only version for apps' developers. If you are that one you can use this tool to jailbreak iOS 6 beta and test apps and tweaks on jailbroken device. Before download let's look at Redsn0w 0.9.13dev2 supported devices because it is not appropriate for all iOS gadgets: Warning: If you are using any unlock for iPhone and worry about preserving old baseband after update YOU SHOULD STAY AWAY FROM UPDATE AND JAILBREAK, because you will lose your unlock and your iPhone baseband will be updated too.

Note: If you are Windows user you have to run Redsn0w as Administrator. Also I have to say that this tool will not hactivate your gadget and this jailbreak is tethered which means that you need to boot tethered your iPhone or iPod Touch if you want or need to restart it. So use Just Boot in Extras menu in Redsn0w 0.9.13dev2 and follow onscreen instructions to boot your gadget tethered. Apple launched iOS 6 beta 2 version a day ago. And there is good news for those who want to jailbreak iOS 6 beta 2. You can download redsn0w 0.9.13dev2 and perform jailbreak! So don't waste your time and download it now!
Blog