It's just awesome to have Facebook integration for iOS 5 just like Twitter does. Well, dreams come true! Fusion jailbreak app adds Facebook, MySpace and (hooray for geeks and hipsters!) Foursquare integration into default iOS 5 Twitter panel. And that's not the end! The Fusion feature allows you to use Siri voice assistant to combine messages for all of the networks integrated into the panel. 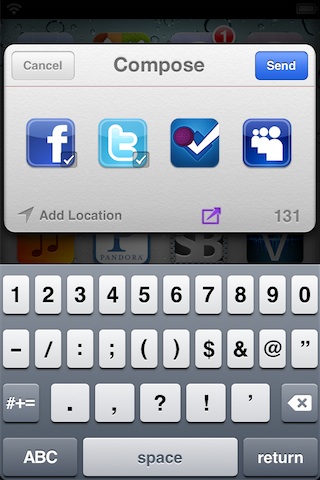 The nice thing about the Fusion jailbreak app it's the app's easy-to-understand user friendly experience. Nothing to learn, the tool just works. If you've ever sent a tweet from device, operated by iOS 5, then it wont' be a problem for you to update Foursquare or change Facebook status into very similar way. Fusion's integration with those social network's mechanisms is pretty close so the tweak seems just right for use with them from iOS 5 device. If you're a lucky owner of iPhone 4S or managed to install Siri on non-iPhone 4S device you're welcome to use Fusion jailbreak app with Furi plugin that can be found under AssistantExtension. Just install that Furi plugin and you'll be able to make status updates, post and do some other stuff just by using your own voice. Except all of the features named above there is an unlimited possibility to add lots of other tweaks into this Fusion jailbreak app. Let's explain: each network works as a simple plugin so any developer can add his own plugins to Fusion. At the price $2.00 (that's even less than a latte) this app is a really must-have and a very nice investment for every Facebook/Foursquare/MySpace (whatever else in the future) fan.  By the way, the Facebook integration fells just like Apple's native one. In general, we can say that this jailbreak app is a sure winner in iDevice social networks integration. You can grab Fusion jailbreak app from BigBoss repo in Cydia already today. I f you plan to grab it, already have it or just have something to say - comment below :)
Blog