iOS 5.1 includes lots of awesome features but has one major disadvantage especially for those who want freedom from the App Store - there's still no untethered jailbreak for iOS 5.1. But I want to install iPhoto on my iOS 5.0.1 device, what should i do then? There's a way to install iPhoto, iMovie and iBooks dedicated only for iOS 5.1 users on iOS 5.0.1. This works for iPhone, iPod Touch and iPad. 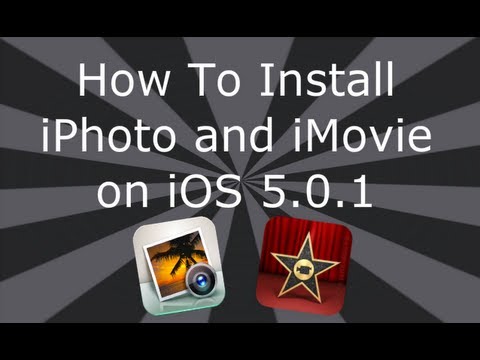 Here are the steps on how to  install iPhoto on iOS 5.0.1 device:
to 6. Save the document and close it. Below is the short video from guys from iDownloadBlog that shows how to perform those six steps shown above. The video demonstrates installation process for iPad but it's pretty much the same for iPhone and iPod Touch, besides, iPad screen is bigger and better for understanding were to tap, you know :) From now on the App Store will think that your device is running iOS 5.1 and will let you install iPhoto on iOS 5.0.1. If you have any issues in iBooks try installing Books Fix for iOS 5 from Cydia app.
After following all of those steps you should run and update both iBooks and iMovie without any issue. However, running iPhoto may require one more additional fix as the app may crash after magic moves with SystemVersion.plist file. To avoid any further problems do the following: Step One: Run Cydia and go to Search tab Step Two: Search for iPhoto501Fix package and install it Step Three: Respring the iDevice. Now all the manipulations are complete and you use this awesome iPhone hack - run iPhoto on your iOS 5.0.1 device.
Blog