Millions of users were surprised to see iOS 9.1 jailbreak release. Hackers from China managed to untether this firware version and those who hurried to perform the jailbreak are now looking for all the tweaks that support their smartphone or tablet device. 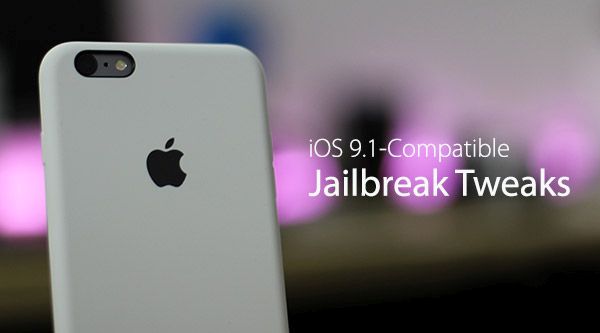 Here is the list of iOS 9.1 compatible jailbreak tweaks. If you are already jailbroken [users who wish to downgrade or upgrade to iOS 9.1 won’t succeed because Apple stopped signing this firmware version] you can download Activator tool, install Snapchat – phantom tweak on your iDevice or get AppInfo. You will get no reboot loop issue if you download Tage app, Filza tweak or Cloaky program. You know that it’s risky to install any tweak because programs that are not compatible with iOS 9.1 could easily cause your device to restore to iOS 9.2.1 and you won’t be able to use your iPhone / iPad. Acapella II, TetherMe, VirtualHome and SwipeSelection Cydia tweaks are also compatible with iOS 9.1. The list also includes SwipeExpander, BatteryLife, ColorBadges, Minimal Hosts Blocker and BetterWiFi7. What else is safe to download? Speed Intensifier, EqualizerEverywhere, MyWi 9, Disable Parallax Effect and NoSlowAnimation are also the tweaks that are compatible with iOS 9.1 firmware version. By the way, iFile, iCleaner Pro, ClassicDock Non-Themes, PhotoAlbums+ iOS 9, NoLiveClock, Portrait Lock are also the compatible jailbreaking apps. The list is pretty long and before you download the tweak you are advised to double check if it is compatible with iOS 9.1 or not.
Blog