Some uplifting news for all those iPhone unlockers who felt completely let down from yesterday’s tweets from MuscleNerd suggesting there could be no unlock in the coming days from the Dev Team. A new method to unlock iPhone 4 – the NCK unlock has been discovered to be only of 40 Bits or 5 digits which makes it theoretically possible to crack it using brute force attack. While the Dev-Team are back to square one again, they are going to try a new theoretical unlocking method that was attempted by Geohot three years ago. This new theoretical unlocking method called NCK unlocking has the possibility (if the Dev-Team are able to carry this method of unlocking out) to permanently unlock the iPhone 4.

The actual process of how this unlock is carried out is complicated and we are going to leave it to Vincent (maintainer of the Dev-Team wiki) to explain: What happend?! I thought the unlock for basebands 02.10.01 & 03.10.01 would be released within the next 2 weeks? As you know the Dev-Team (MuscleNerd) have been working on the unlock for quite a while now. They were making great progress on the unlock, but they found out that they (accidentally) unlocked “one particular SIM card” instead of the baseband itself. Which means that the unlock would only be an unlock you could use with MuscleNerd’s T-Mobile SIM. So, useless. If the unlock would unlock the baseband instead of “the SIM”, it’d probably be out within 2 weeks (reasonable timeframe which they had hoped). Each iPhone has its own HWID, NORID and CHIPID. All of these IDs are embedded into internal hardware chips of an iPhone. When you connect a locked iPhone to iTunes, it send your unique HWID, NORID and CHIPID to Apple servers which then generates and sends a NCK to unlock your iPhone on official carrier. The length of NCK unlock code is 15 digits only; having said that, keyspace of size 10^15 is too large to enumerate and crack thorugh brute force methods. 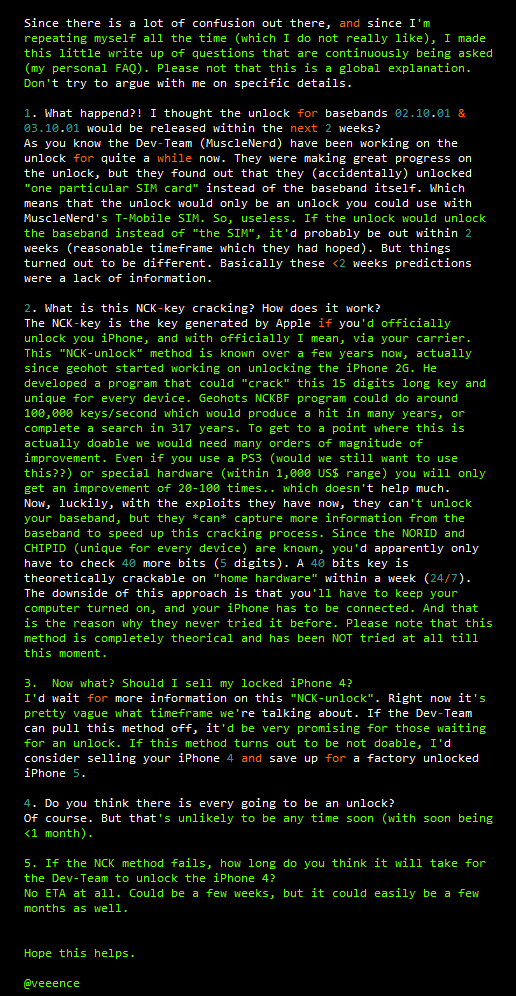 Now what? Should I sell my locked iPhone 4? I’d wait for more information on this “NCK-unlock”. Right now it’s pretty vague what timeframe we’re talking about. If the Dev-Team can pull this method off, it’d be very promising for those waiting for an unlock. If this method turns out to be not doable, I’d consider selling your iPhone 4 and save up for a factory unlocked iPhone 5. Do you think there is every going to be an unlock? Of course. But that’s unlikely to be any time soon (with soon being <1 month). If the NCK method fails, how long do you think it will take for the Dev-Team to unlock the iPhone 4? No ETA at all. Could be a few weeks, but it could easily be a few months as well. If you managed to read through and get the basics of what an NCK unlock is, then you can see that it is quite promising if the Dev-Team can pull it off. There are many tweets going around the web right now about the NCK unlock but until anything is set in stone this is just a theoretical idea (don’t let anyone convince you otherwise). That is not to say however that the Dev-Team are not working on it as we speak; but no details will be released anytime soon until the Dev-Team have valid evidence that this new theoretical method of unlocking will prove to actually work.
Blog