Recently Siri came to A4 iOS devices. It is no the secret that you can use Siri on iPhone 4 and 3 GS, iPad 1,2 and iPod Touch 4G, 3G. All you need is to install Cydia tweak from chpwn - Spire on your iOS gadget and have Siri Proxy server. This Cydia tweak uses a proxy address instead of connecting to Apple's servers for iPhone 4S authorization keys.  But how can you find good working Siri proxy server? There are a lot of different Siri servers however it is difficult to find something that works. So what can I choose from Siri Proxy Servers nowadays? The most is Three Little Pigs Siri Proxy Server by Jimmykane. If you want to install the TLP ("Three Little Pigs") Siri Proxy Server you have to put many commands in terminal to make it work. 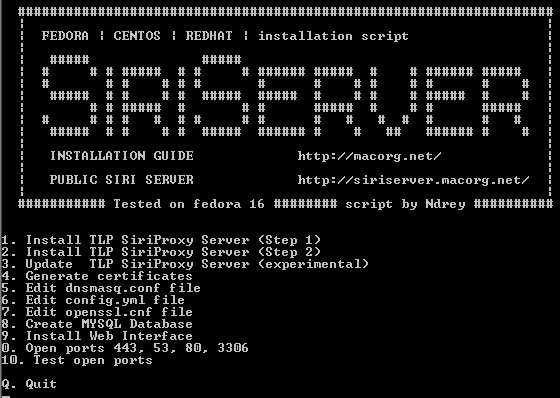 This script should also work on both CentOS and RedHat Linux distributions. I suggest you to run the SiriProxy install on fresh linux installation. Some script functions: The only thing the script coudn't do is to run TLP web interface. After you have used this script just open your browser and navigate to http://YOUR_IP_ADDRESS/install.php and type all your own parameters. When you finished to do it, remove install.php file using following command:

You need a C compiler installed! On most Linux Distros this comes out of the box.

To download TLP_Fedora.sh script open terminal and type: Direct download link Note: if you don't have wget installed on your system, just type into the terminal: Then try to download the script again.

First open the terminal and enter into the directory where you've downloaded the script. To to this type: To make the script executable and run type: Please report bugs to [email protected] Debian version will be released soon. Tested on clean Fedora 16 install.
Blog